Electric bikes are great alternatives to owning a car or using public transport. They enable you to get around the town, commute to work, evade traffic jams, and exercise.

E- bikes require very little maintenance, with batteries having a few charging costs. Still, wondering how much does it cost to charge an electric bike?

It will cost you $0.04 to $0.08 to fully charge an electric bike. This lasts 20 to 40 miles on average. However, these costs vary greatly depending on the battery voltage, capacity, and local electricity rates.

E-bikes’ batteries vary in terms of capacity  based on the bike type and size , rider weight, and terrain type.  For example, if you ride uphill, you’ll need a higher voltage and capacity battery.

Is It Expensive To Charge An Electric Bike?

It is pretty cheap to charge an electric bike. As said earlier, the average cost per charge ranges from 4-12 cents. In most countries, charging prices an average of 7 cents. You can expect to pay a total of around $29 on average to charge your electric bike in a year. 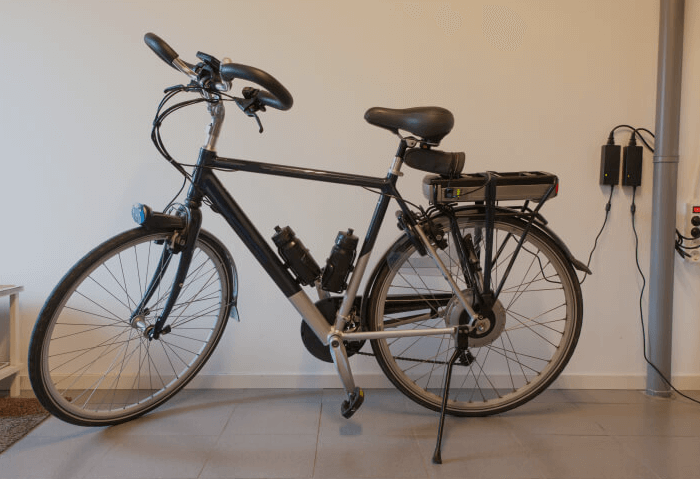 The total yearly cost depends on the locality . For example, charging an electric bike in the US will cost an average of $21.17 per year. The cost goes even lower in countries like China and India, where the price per charge is 3 cents. Here, it costs you a total of around $13 to have your bike fully charged.

In a way, charging an electric bike is relatively cheap. It could save you thousands of dollars in fuel when using a car. This explains why more people are turning to electric bicycles as a way of commuting over short distances.

How Long Does It Take To Charge An Electric Bike?

When the battery is flat, it will take 3.5-4 hours to charge the battery to 100% fully. However, your battery hits 80% charge in 1.5 hours before slowing down. Most electric bike batteries slow down charging in the last 15-20%. It’s recommended to charge your battery when it’s flat or somewhere below 40%. This gives your battery a longer lifespan.

It is worth noting that most electric bike batteries offer up to 1000 recharges. So, if you’re commuting an average of 20 miles a day, your battery should last up to 7 years.

The charge duration can also vary depending on the battery capacity and voltage. A fully depleted lithium battery will take 3.5 to 6 hours to fully charge. Batteries with a partial charge take less time to charge as opposed to completely flat batteries.

How To Calculate The Cost Of Charging An Electric Bike

Most people know the cost of charging their electric bikes. But, do you know how the cost is calculated? 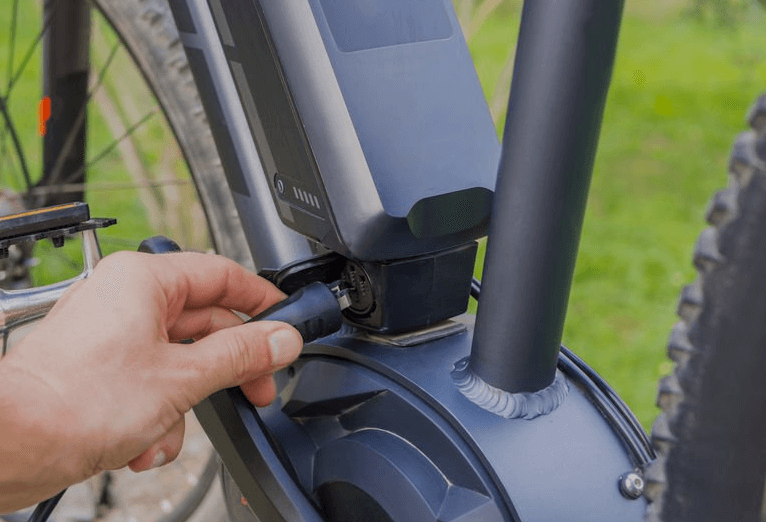 The first step in calculating the cost of charging is knowing your battery capacity in Watts hours (Wh). Next, convert the Wh into Kilowatt-hours (Kwh). Then, multiply the Kwh by the unit charged by your electricity provider.

Step 2: Get the battery capacity

Can you find the Wh of your battery? If not, here is how to calculate it. Multiply the battery Voltage (V) by Amp-hours (Ah).

For example, the popular ANCHEER electric bike has a Voltage of 36V and 10.4 Amp-hours. You can calculate its Watts hours as shown below:

Now that you know the battery capacity convert it to Kilowatt-hours. Kwh is the unit electricity providers use when billing customers. One kWh is referred to as one unit of electricity.

Step 3: Multiply the Kwh by the electricity provider Kwh rate

Finally, you can now find the cost of charging by multiplying the Kwh by the rate your electricity provider charges.

For example, most electricity providers in the United States charge an average of 13 cents per unit of kWh. In the United Kingdom, the cost is 8 cents per kWh.

How Much Does It Cost To Charge An Electric Bike?

Now you know how to calculate the cost of charging an electric bike, let’s see how much it will cost you to charge the electric bikes.

As shown above, the cost is variable so we better calculate it  on an average. It costs around 7 cents to charge a flat electric bike battery to 100% fully. This translates to approximately $29.38 a year.

The cost per charge is a few cents ranging from 3 to 12 cents. Again, this varies from one country to another and from one electricity provider to another.

The cost can also vary depending on the battery capacity, available partial charge, and much more.

A fully charged electric bike delivers an average of 22-40 miles on a single charge. Again this varies depending on where you’re riding, battery self-discharges, and much more.

The annual costs are calculated by the number of charges you make in a year multiplied by the cost per charge. As shown earlier, if the average charge per cost is 7 cents, the annual costs will be around $29.38.

The annual costs also vary significantly among individuals and countries. For example, if you ride occasionally, the costs will be much lower for someone that rides daily.

Average Cost per year For An Electric Bike in 20 Countries

As indicated earlier, the cost varies from one country to another. This is due to varying electricity costs in countries, taxes, and much more. Below is a table that shows how much it would cost you to charge an electric bike in 24 different countries.

The prices are likely to fluctuate due to various reasons. The prices are as per the time the table was created. Some of the resources used in the creation of the table are from Statista, which shows the average prices of electricity per country. The table is created with an imagination of electricity bikes replacing cars. So, the cost was calculated based on the annual miles driven in the US.

Realistically, the cost would be higher than indicated in the table. However, the table gives us a reasonable estimate of how much you would use to charge your electric bike. It is also estimated that riders get 31 miles per single charge. This simply means you would charge the battery 435 times to hit 13, 500 miles that most drivers go in a year.

Overall, several things would cause price variation. For example, I don’t expect you to fully replace your car with your bike. But, assuming that happens, the costs would be as shown above. Secondly, battery runtime changes greatly based on terrain, rider’s weight, self-discharging, etc.

Surprisingly, the cost of one tank of gas to fuel your car will charge your electric bike for 2-3 years.

9 Ways To Reduce The Cost Of Charging Electric Bikes?

The best way to save on e-bike charging is by choosing a high-efficiency battery with low internal resistance. Higher efficiency means less power loss in the battery itself, which will give you more miles per charge.

This can be achieved with a lower-capacity battery or with a battery pack that uses multiple smaller batteries. If you choose between a 12V and 24V battery, choose the latter as it requires less current for the same power output.

2. Use a charger that charges at a constant current:

Most chargers today use a constant voltage method where the voltage supplied to the battery changes, but the current remains constant. In this case, the amount of time required to charge the battery increases with increasing battery capacity fully.

However, if you buy a charger that charges at constant current, then there is no such problem. It takes the same amount of time to charge any given battery regardless of its size fully.

Batteries need proper care and maintenance to ensure their longevity. Regularly clean the battery terminals using a cotton swab dipped into rubbing alcohol or another suitable solvent. Also, make sure you check the state of charge before every ride.

4. Charge only when necessary:

Charging a battery while it is fully charged is not a good idea. Doing so may cause damage to the cells and even shorten the life of the battery. Instead, try to keep the battery below 80% of full charge.

5. Charge in the morning:

When you wake up in the morning, the sun is shining brightly, and the air temperature is cooler than during the day. This means that charging in the morning is usually much faster than later in the day.

This is significant in  reducing energy usage in any car or bike. It means that when you brake, you can actually get back some of the energy you used to slow down. This is also true for an electric bicycle with regenerative braking.

The more you brake, the faster you go, so if you have regenerative brakes, then you can use them to generate power as well. You should be able to find information on how much energy you can recover from each brake stroke

Solar panels are becoming increasingly popular for powering electronic devices. You can also install them to provide additional power for your e-bike.

Many offices now offer free public charging stations for employees to use. Some companies also allow their staff to bring in their own personal charger.

9. Use a smartphone app:

There are many apps available online that can help you monitor your battery level and tell you how long it would take to fully charge.

A fully depleted 48V battery will take an average of 6 hours to charge fully. This is a high-voltage battery designed for overnight charging. Batteries that have a partial charge will take less time than those that are fully depleted.

2. Do Electric Bikes Charge When You Pedal?

3. Can I Leave My Ebike On Charge Overnight?

4. How Often Should I Charge My Electric Bike?

To sum up, it is pretty clear that charging cost of an e-bike ot its battery depends on knowing how and when to charge it.

The battery is the power source of the controller. Therefore if the battery is not fully charged the bike will not perform in its best phase. Nevertheless the charging cost shouldn’t be a headache for you. If so, then the facts and tips discussed here can be a relief.